One of the top travel destinations in the world is Egypt. No matter its recent political turmoil, the country still remains high on vacationer’s lists of places to travel too.  Visiting the Pyramids of Giza and the mysterious Sphinx are a major highlight of the many things to do when visiting enigmatic Egypt.

When one considers the thousands of years the magnificent architectural structures have stood on this sacred ground it is sad that most visitors who stream from the endless convoy of coaches and cars spend relatively little time on the Giza plateau, sandwiched between the city and the ever-shifting sands of the Western Desert. [pull_quote_right]Egypt still holds many mysteries![/pull_quote_right]

It seems many do little more than gaze up in open-mouthed wonder at these ancient monuments before taking the obligatory family pictures and returning to their air-conditioned vehicles. What a great shame, for there, is much to see and explore at Giza.

According to archaeologists, the three main pyramids were built around 4,500 years ago as burial tombs for the Fourth Dynasty pharaohs.

The most imposing structure, aptly-named ‘Great Pyramid’, also known as Pyramid of Khufu, and Pyramid of Cheops, is amazingly the only one of the Seven Wonders of the World that still stands relatively unscathed by the test of time.  It was erected by Khufu, father to an astonishing seven sons, and fifteen daughters.  He is believed to have reigned from 2551 to 2528 BC.

Adjacent are the Pyramid of Khafre (son of Khufu) who ruled from around 2520 to 2494 BC, and Pyramid of Menkaure (son of Khafre) whose reign spanned between 2490 BC and 2472 BC (approximately).

Some ancient structures do not warrant the ‘hype’ in which they are been enveloped by over-enthusiastic guidebook writers and journalists.  However, this cannot be said of the Giza Pyramids, and in particular the Great Pyramid – a truly awesome structure soaring to a height of just under 140 metres (originally several metres higher, though some of the uppermost stones have since been removed), at an angle of approximately 52 degrees and has a volume of nearly 2.6 million cubic metres.  It is estimated that a staggering 2.3 million blocks of stone were used in its construction, and some of the internal granite beams tip the scales at an incredible 50 and 80 tonnes.  It is thought to have taken approximately 20 years to complete the construction of this giant!

In his excellent and extremely comprehensive book, The Complete Pyramids (Thames and Hudson, 1997), Egyptologist Professor Mark Lehner quite rightly says that “such statistics…never cease to astound.”

One of the many mysteries surrounding the Great Pyramid is why it was built with such extraordinary precision. According to Lehner, the base is level to within 2.1 cm, while the greatest difference in the length of the four sides is a mere 4.4 cm.

The King’s Chamber – An Eerie Experience

Why such accuracy should be necessary if the pyramid was intended only as a tomb for a pharaoh has been the subject of much speculation (some of it wild) over the years.

Anyone who reaches the Giza plateau should definitely make a point of entering the Great Pyramid, unless of course, they are claustrophobic.  Today’s visitors enter not via the original and undoubtedly impressive entrance which is still visible, but along a rough-cut tunnel that was either dug by tomb robbers or early archaeologists.

Nothing can prepare one for the impact felt when they first set eyes on these immense ancient structures, for what lies at the end of the tunnel and ascending passageway upon entering the Great Pyramid (which houses three main chambers) is breath-taking, take for example the Grand Gallery with its corbelled walls that rise majestically to a flat ceiling nearly nine metres above. The gallery is a staggering architectural and constructional achievement given the fairly simple tools believed to have been available some 4,500 years ago.

The Grand Gallery leads to the King’s Chamber – once sealed by a portcullis system comprising of three sliding granite slabs which slotted into the walls of the adjoining ante-chamber.  Whatever ‘treasures’ the King’s Chamber may have once held, only a broken and empty red granite sarcophagus remains today.  It is thought that Khufu’s tomb was sadly broken into thousands of years ago and that the stone coffin was badly damaged when robbers lifted the heavy lid.

Standing alone in the King’s Chamber is an eerie experience, for every sound one makes from heavy breathing (it’s very warm in there) to walking, the sound resonates.

Below the King’s Chamber is the incorrectly named Queen’s Chamber, which may, according to Lehner, have housed a statue of Khufu.

Thirty metres under the Great Pyramid and carved from the solid bedrock of the Giza plateau is the mysterious and uncompleted Subterranean Chamber.

The Illusion of Khafre’s Pyramid

On the southern side of the Great Pyramid stands a modern museum housing one of Khufu’s royal sailing barques. Discovered in 1954 in a sealed pit in 1,224 separate pieces of cedar wood, the 43.3-metre long vessel was painstakingly reassembled over a period of many years and then housed in the boat-shaped museum just metres from where it was found.

The second largest of the three main Giza pyramids was built by Khafre, one of Khufu’s seven sons.  From a distance, it appears to be bigger than Khufu’s pyramid but in fact, this is merely an illusion created by the fact that Khafre’s pyramid stands on a higher on the plateau than that of Khufu. The distinguishing feature of Khafre’s pyramid is the intact outer casing of fine Tura limestone clearly visible on its summit.

Menkaure’s pyramid is by far the smallest of the trio and wasn’t opened until 1837, even though a huge hole was made in one side in AD 1196. Unfortunately, the beautiful sarcophagus discovered in the burial chamber by Richard Vyse was later lost at sea whilst being transported to England.

And finally, to the most enigmatic of all the Giza monuments is the Great Sphinx created from the body of a lion and the head of a man.  It stands sentry-like in front of Khafre’s pyramid and is believed by mainstream Egyptologists to have been created for this pharaoh. However, some geologists, most notably Dr Robert M. Schoch (USA), believe the Sphinx was built not around 2,500 BC but thousands of years earlier.

Unlike other structures on the plateau, the Sphinx was built from individual blocks of stone but carved from the limestone bedrock.  Sadly the Great Sphinx is not surviving well in the elements, and even though much-focused attention has gone into restoration attempts, none of these have helped the situation and thus this great monument is sadly still crumbling.

Tourists are spoilt for choice in and around Cairo as far as archaeological sites are concerned. In Saqqara, for example, there are Djoser’s Step Pyramid (the very first pyramid – 2630 B.C.), Unas’ Pyramid (built around 2375 B.C.) with its beautifully carved, blue-painted hieroglyphic texts, as well as various private tombs, including the large and elaborate example of high official Mereruka which has 33 decorated chambers.  In Dahshur, one can find Sneferu’s (2589-2613 B.C.) Bent and Red Pyramids (both built around 2600 B.C.).

Not far from Saqqara, in the village of Mit Rahina, is the Memphis archaeological area where visitors can stand alongside a truly colossal statue of Ramesses II (19th Dynasty).

Last but by no means least, in Cairo itself, one may visit the world famous Egyptian Museum which houses around 150,000 artefacts that are on display to the public. The highlights are undoubtedly the ‘treasures’ of Tutankhamun, and the royal mummies.

It is sometimes assumed that archaeologists have unearthed most of what is likely to be left of Ancient Egypt but in fact only about 30 percent of Egypt’s past has so far been uncovered, so as Dr Zahi Hawass, Secretary General of Egypt’s Supreme Council of Antiquities puts it, “Egypt still holds many mysteries!” 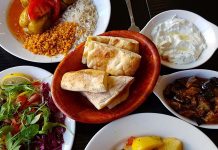 The Emirate of Dubai

Activities and Places of Interest in Dubai

This site uses Akismet to reduce spam. Learn how your comment data is processed.